Born in Eugene, Oregon in 1950, Allen Cox is a Pacific Northwest contemporary painter. Cox has been showing his work nationally since 1982 and internationally since 2003. He holds an MFA in painting from the University of Oregon, where he studied with the highly regarded Pacific Northwest abstract painter Frank Okada. Cox worked as a field archaeologist and scientific illustrator for over 10 years in Oregon, experiences which profoundly influenced his painting.

Allen Cox's work has been featured in New American Paintings: Artists of the West, a profile video segment for the public television program Oregon Art Beat, the book 100 Artists of the West Coast, various design journals and other visual media including book covers, CD covers, film and television. His paintings are found in numerous public, corporate and private collections throughout the US, as well as internationally. Cox has lived and worked in Oregon, New York and New Zealand. He currently resides in Knoxville, Tennessee. 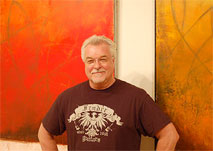 Mystery and revelation, history and myth, intuition and logic, dream and memory... these are the polarities that compel and inform the heart of my work.