Paul Ecke is a mid-career painter of contemporary non-figurative and figurative works on canvas and panel. His works are an amalgam of color, texture and movement achieved through application of oil and acrylic paints to canvas, all applied by brush, hand and even trowel. The results are magnificent, colorful, thought and emotion- provoking images that convey the inner strength, conviction and complexity of the artist.

Paul Ecke was educated at California State University, Fullerton, receiving degrees in art with emphasis in ceramic arts and painting. His classical training taught him to represent the human form. His skill as a ceramicist affects his paintings, giving them a three- dimensional quality through the application of textural media to his works on canvas.

Regardless of the subject, Paul Ecke's work continues to evoke deep soulful responses from viewers who often find themselves mesmerized in front of Ecke's canvases. People are drawn by the expressive brushstrokes, colors and textures that have become his signature.

With his formal education complete, Ecke pursued a career teaching art in the California public school system. He headed the entire district art program for Centralia School District of Buena Park, California. Ecke enjoyed his nine years as an educator but longed to pursue a full-time career in the creation of his own art.

Paul Ecke has been a full-time contributor to the contemporary art world since 1985. His works are in the collections of the Metropolitan Museum of Art, Manila, Philippines and the Daytona, Florida's Museum of Arts and Science. He has shown in galleries in New York, Chicago, San Diego, Palm Springs, Florida, the Philippines and Bali, Indonesia. His works are in many private and corporate collections including those of Universal Studios, Jimmy Z Sportswear, Taco Bell, Flojet Corporation, Carsey Warner Productions and Dionne Warwick's collection. Works by Paul Ecke are already slated to be part of endowment of contemporary paintings and graphics art to London's Museum of Contemporary Art. Paul Ecke's has been the featured artist in numerous art publications.

Ecke's compositions are based on abstractions. Each painting's quality lied in is power to suggest many rich and varied analogies, however diverse they may be. The works are rich in inspired concepts that follow a stream of thought has always fascinated the artist. With his series "Quadrants", Ecke continues to examine the abstract notions of time, space, thought, the philosophy of color and their relationship to the human experience. The group of paintings assembled for this exhibition, "Quadrants", deals directly with four stages of man's spiritual development. The viewer can see throughout this series a delineation of the works into panels or segments that make up an entire piece. Like the stages of our spiritual development: "The Athlete", "The Warrior", the Statesman" and ultimately "the Spirit" these works reflect life's journey and weaves together the tapestry of our life experience. The result, sensually balanced, vibrantly colored works that exude a richness of texture and depth of creativity.

In his series "Fractals," (released in 2007) Ecke explores the complexities of human inter- relationships in the form of the line, pattern and color. Ecke addresses the timeless journey of the eternal acting as a shamen. He in turn allows us to confront the passages of birth, life and death. In nature as well as mathematics, fractals are geometric objects that in their basest form contain self-similar structures that are repeated in the whole. Thus, everything comes from and is composed of fractals. For, Ecke the fractal becomes his meditative mantra and his path-road into this life experience. From the child to the man, life is composed of repeating relationships and inter-connecting journeys. His stripes transform into intersections and his circles become cycles of consciousness. Each artwork is created through applying multi-layers of paint and media and then stripping them away. Thus, even in his process, Ecke demonstrates that all can be deconstructed and constructed again from simple elements. With each piece the viewer is then asked to engage in their own personal dialogue of their roadmap.

Where his "Fractals" suite emphasized the power of singular thought placed into the form of prayer, Paul Ecke's "Conversations" series (released in 2009) delves into the richness of dialogue with others and oneself. This has been a very personal journey for Ecke, as he has had to confront illness this past year. This path has allowed him to touch a more empathetic and patient part of himself.
Each painting is titled conversation as one is not more important than the others nor is there a beginning or end. Instead Ecke asks the viewer to walk along his path where sometimes in the quiet moments of waiting, which he inscribes on many of the works, he finds answers greater than himself.

The childlike drawings impart a sense of whimsy and playfulness but on a deeper more intuitive level these show the psychological affect that sickness has not only on the body but also on one's spirit. Ecke travels back to a child's interpretation of safety with the entrance of the circle. The form becomes a symbol of unity, completeness and wellness. In many ways it harkens back to the comfort of the womb and the safety of a mother's caressing arms.

Throughout the works there is the element of words. It is through language that man separates himself from the animal kingdom. Words can harm and at the same time words can also create. In breaking down the letters and then building them up again, Ecke breathes new life and a new beginning into these letters. He asks us to question not only outwardly for meaning but inwardly. For only in understanding ourselves can we grasp the universe beyond. And in coming to the beauty within then can we bring wholeness and kindness to others.

In "The Human Canvas", (released in 2010) artist, Paul Ecke explores the reality that each of us is tattooed, some on the outside but all on the inside, where we all hide our burdens and pleasures in a very secret way. This suite is a continuation of the artist's earlier work "Men Behind Gates". "Men Behind Gates" represented a return to his classical figurative training and became an awakening of man's emotional struggles - struggles imposed by society as well as self. Like "Men Behind Gates", this is a raw and an emotionally driven series that is both bold and honest in content. Yet "The Human Canvas," forgoes the implementation of the painted gate and instead propels the viewer to a more provocative and passionate exploration through the form of the tattoo.

Each painting includes was a collaboration of letters, drawings from tattoo artists and models who all participated to bring each work to fruition. All were united through the commonality of the tattoo – the art form of using skin as canvas.

Like the rawness of German Expressionism, Ecke used figurative line drawings, mirrored symbolism and thick impastoed paint to capture the human body. There is a three- dimensional quality to the works as the artist encapsulates many found objects into each piece. These objects reflect on the character of the person. Numbers from numerology and astrology, words, screening, photographs, textures and layers were all part of the process of the works. Each of these elements refers back to the artist's previous series "Fractals", "Industrial Elements", "Quadrants" and "Patterns with Purpose" which use repetitive patterning to highlight the rhythms of nature and prayer. At first glance, one may be drawn into the stories captured on the canvas but as one pulls back the weight of the work fills the viewer's senses as the tattoo transforms into a cathartic symbol of life looked at introspectively.

On the surface, the artist was confronted by the cultural stereotypes of tattoos. Instead he found intellectuals, professionals and artistic expression. He examined the historical, trends and decorative nature of the tattoo and discovered that the tattoo consciously or unconsciously is another form of a doorway to one's deeper self. The artist saw how the tattoo transformed from man/woman's journey to their coat of arms. In the process, the artist discovered that what was and has always been relevant has been who they are inside. With the revelation, he decided to expand his circle of subjects to include those close to him. Then the paintings took on another layer of meaning and he explored through symbol, line, cross-hatching and circles the conversations we all have about our stories and more importantly our mission in this life.

In dialoging with the many models and tattoo artists, writers, fans and friends one is struck by the symbolism of the tattoo as another level of realism that allows us as humans to connect to the keystone of the soul. Tribal or avant-garde, Japanese or urban, art brut or decorative the tattoo becomes the storyline that speaks to each of our own personal journeys and connects us to the universal.
Due to be released is Ecke's "Passions and Addictions" suite. With these works the canvases are built up, scratched back, painterly and loosely sketched. Yet unlike Warhol's "Campbell Soup Cans" as Pop or Duchamp's "Urinal" as Dada, Ecke brings a contemporary voice to the context of art. The audience as consumer is asked to be a participant as well as be judged and judge others. In his painting "Tall or Venti", Starbucks coffee cups are patterned along the canvas. The logo is elevated to icon. The question is asked "How is Starbucks equated with happiness?" When did consumerism and big business dictate our morals? When did the path to enlightenment become an end to the sale of a product? Ever more deeply, Ecke explores the complexities and dichotomies of living in a capitalistic culture. How does one reconcile a company putting out of small business yet at the same time providing expansive employee benefits? How does one justify global prosperity and find fault with eradicating cultures? Ecke examines this fine line we walk every day, a line most tend to ignore as long as it feeds our passions and addictions. 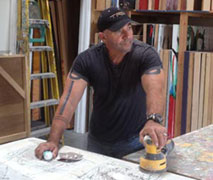 "Art in its truest form is like story telling ... it's creating a sense of engagement or dialog with the viewer. These paintings are intended to appear simple, but delivering a considerable "emotional punch" with the complex depth of the messages with-in them."