The Domestic Collection – The Object As An Utopian Proposal.

"Jill Daniels speaks through solitary pieces of furniture to communicate ideas about her past life and future aspirations. Her acrylic paintings of chairs, ottomans, beds and lounging sofas hint at the kind of symbolism found in a world where the unexplained is governed by supernatural rules." AndrewShire Gallery – Soohoh Gallery West into East exhibition, Korea.

There is a moment we create just by inhabiting the space we are in. What happens to that space after we have departed? Do the memories linger long after the time has ended? These are the questions proposed by my paintings. Can we savor the moments that make up our lives? These paintings are designed to give the viewer that space. In a time when most of our lives are spent living at a frantic pace the Domestic Collection gives the observer an opportunity to reflect upon the moment that is documented in front of them. It is one crystal moment in time when all that is in front of them, is all that there is.

Can home and the objects that make up the place where we dwell take us beyond our daily existence? I pose the question that they may guide us in our earth bound life, while being a framework to transport us into a higher plane. You, the viewer, will find the answer.

Born in Fairbanks, Alaska, Jill has been drawing and painting from an early age. At age eighteen Daniels moved to Southern California to attend art college and begin her formal artistic disciplines. She received a BFA in Fine Art from Pepperdine University. To gain an international perspective on the art scene, Jill lived and studied art history in Heidelberg, Germany and painting in Florence, Italy for a two year stint while traveling extensively throughout many other countries. While studying in Italy, Jill was profoundly influenced by the work of the minimalist painter Giorgio Morandi. After returning to California, she studied illustration at the Art Center College of Design in Pasadena, California.

Along with exhibiting and selling paintings to collectors in Asia, Australia, Europe and throughout the United States, Daniels' talent as a painter has also translated into a highly successful career in illustration with entertainment companies. Her art direction and painting skills have been behind numerous productions for Disney, Warner Bros., Dreamworks, Nickelodeon, and MGM. While at Universal Studios, she was instrumental in developing and executing the Emmy winning PBS show, "Curious George". She has since returned to Disney where she art directs the animated show "Phineas and Ferb" and recently won a Primetime Emmy award for outstanding individual achievement in color and painting. 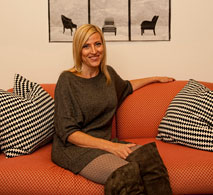 "Through the use of iconic pieces of furniture, I give voice to human connections, thus documenting a world for my viewers where the unexplained is governed by supernatural rules."